Published by: Nouman ullah baig 11:10:00 Android APK, Android Games
Here android users can Undead Slayer VS Skeleton offline Apk for their android mobile phones and tablets here. To download Undead Slayer VS Skeleton offline Apk for android, the link is provided below. The undead skeleton destroys the village. In the village, people are wounded by these undead ones. Common weapons cannot kill them apart from the holy sword of the courageous fighter (undead slayer). To play Undead Slayer VS Skeleton offline, you need to keep tapping to release the undead slayer and run after him to kill the undead skeleton. Undead Slayer VS Skeleton offline is full 3D action game in which the player has to face the endless challenges as the aim remains the same. The objective of the game is kill the undead skeletons. Among the various levels in the game, you can easily customize your character in terms of changing the kits and powers. At some moments, you might need to retool the weapons that will help you to face the challenges. The whole system of the game is especially designed for the touch screens. You only need to tap and slide your finger on the screen to perform the attacks. Overall, the game is full of action and fun that is perfectly adapted for the touch screen with its amazing graphics. The users have rated this game with 3.9 stars. Players also commented that they never get bored from this game as it is full of curiosity. 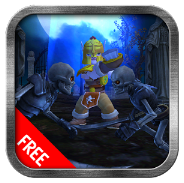 Features:
ü  Overall the gameplay is simple and straight forward
ü  Effects of the skills on every level
ü  The platform of the game is 3D
ü  Amazing scenes of the dead land, models of the character and cartoon FX
Requirements:
ü  Updated: Nov 30, 2016
ü   Version: 1.13
ü  Size:  30.20 MB