Published by: Nouman ullah baig 12:41:00 Android APK, Android Games
Download Mission IGI: Commando War Jason 1.1 APK, for free. This game is exciting war game between terrorists and IGI commandos. Those who like war and fighting games; you are going to love Mission IGI: Commando War Jason. The characters in this game are of US IGI commando and trained arm-forces, in this game the IGI agency has responsibility to attack on terrorists under supervision of Jason. Jason is in authority to crush down all terrorists and terrorists organizations.
The completion of game may be challenging fir user, because it is not easy mission for attack on terrorist. For completion of mission, the users have to act vigilantly and proactively while using attacking tricks. As terrorist organization is more powerful and had capacity to breakdown IGI agency, thus User will enjoy the thrill and excitement of Mission IGI: Commando War Jason. If you are interested in Mission IGI: Commando War Jason, Get this application by clicking of link given bellow and ready yourself for an intense battle game ever you played. The best part is to combat against terrorists, where Jason the IGI commando Sniper is having special equipments like sniper rifle and handgun for quick attack. Game has 5 challenging levels, where the IGI commando sniper spy will attack on the terrorist organization to crush the terrorists. The commando sniper will attack by progressing levels and battle will attack on terrorist leaders to crush finally with huge machines. 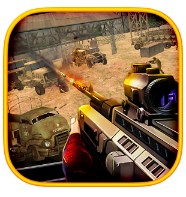 Game features:
This Game has wonderful FPS weapon controls.
This game has features of exchanging Weapon.
This game has three Primary Weapons such as Magnum, Sniper and Rocket Launcher.
This game has five objective based levels with thrilling features.
This game has intense shooting action.
Details of game:
Name of game: Mission IGI Commando War
Version of game: 1.1
Developers: The New Games
Game requires: Android 2.3 or up
Update on: May 10, 2016
Size: 111.5MBs
Contact: thenewerapps@gmail.com